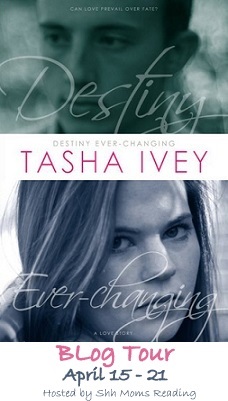 (Click on the Image above to go to the tour schedule)

Thank you for stopping by Brandee’s Book Endings today for my stop on the Destiny Ever-changing Blog Tour being hosted by Shh Moms Reading and the wonderful Kim Box Person!  Make sure to check out my review, enter the GIVEAWAY at the bottom of this page and check out my Author Page for Tasha to find out more about Tasha’s future releases, etc. 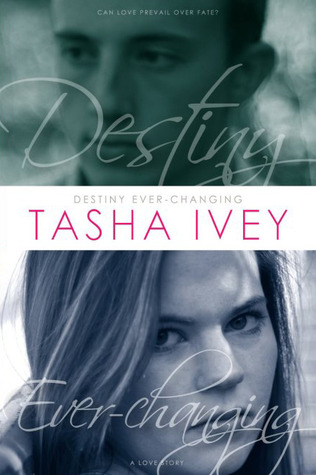 Some are destined for greatness . . . others for pure unadulterated misery.
After catching her boyfriend with another woman, Laura struggles with beginning again, knowing deep down that she is destined to be unhappily out of love for her entire life. Needing some time to recoup and formulate a game plan, she decides to visit her notoriously wise grandmother. But once there, a curveball in the form of a deliciously attractive stranger has her falling again.
Brooks is another story altogether. He is quite content with his life until his father forces him into a business decision that will ruin the rest of his life. As if his relationship with his father isn’t tumultuous enough, his new fiancé is making every waking moment a living hell and loving every manipulative minute of it.
When Laura stumbles upon her mother’s old journal, she opens a door into a long forgotten past. A past that somehow leads both Laura and Brooks into unfamiliar territory and changes everything they ever knew about fate.
Destiny is ever-changing, after all.

Tasha Ivey’s debut Novel “Destiny Ever-changing” was a perfect chick-flick book to curl up on the couch with.  This was a very refreshing read for me.  I have been reading either darker subject matters or major hot & steamy books (not that there is anything wrong with that LOL), but this was a pleasant change of pace…..that I just need sometimes.

There were so many things that I really enjoyed about this story.  First I will say, Tasha tells a beautiful story and it was very easy to follow along.  Second, this is definitely a love-story….and it was SWEET and kept me reading (even though I figured out the way things were going to turn out, it was really fun getting there).

The story is told in both Laura and Brooks points of view, which you may know by now that I do like, so that I can get into both of the characters heads (and I found it was definitely worth getting a look into Brooks’ head – otherwise, I may not have liked him as much).  Tasha had the ability to make me easily like the characters I was supposed to and really dislike others.  Specifically, I can picture and hear Brooks’ fiancé in my head!  Well done Tasha!

As always, I do not want to give anything away, but since this is mentioned in the blurb I feel comfortable doing so……..I really loved the journal part of this book.  It reminds me of going through some of my grandmother’s old keepsakes (photos and some journal entries)….now if only my grandmother was more specific in her journal!

I was pleasantly surprised and really enjoyed reading this book.  I was going to say that I could totally see a sequel or novella to this book based on some of the secondary characters, BUT, I found out recently from Tasha that  a sequel is in the works with exactly the characters I thought could work!  I will certainly be putting that book, as well as other future books that Tasha will be releasing in the future onto my to-read list!

“Regret won’t get me anywhere.  I’m finally learning that the decisions that I have made are shaping me into a new person, and I am okay with that”.

I give my order to the waitress, and Will does the same. I am happy to find out that we aren’t too late to get some of the day’s special—homemade chicken potpie. Within minutes, two steaming plates arrive at the table, and I eagerly grab my fork. I didn’t realize how hungry I am. I scoop up a huge bite and shove it into my mouth as I hear the bell on the door jingle. I look up to see who is coming in, and I immediately begin to choke.
Will looks up at me. “Geez, dude! Slow down and let it cool off a minute!”
“That’s not the problem.”
“Well, okay then, take smaller bites. You eat like a toddler.”
“No, moron. Look at who just came in the door.”
Will abruptly turns around and sends a spoon clanging into the floor. “Hey, it’s Laura!”
I shake my head in embarrassment. “Way to be discreet, Will.”
“What? You didn’t say discreetly look. You just said look. Want to go say hi?”
“No! Just stay here and be quiet. I don’t want her to see me.”
He raises one eyebrow. “Why is that? I thought she was your friend. This would be a great time to ask her about the cookout.”
“I don’t know any details yet,” I explain. “I’ll wait to ask her when I know what day. I just don’t want to talk to her here. She’s with her grandmother, anyway.”
“I still don’t understand why you won’t say hello to her,” he argues.
I don’t really hear what Will is saying. I’m too busy trying to read her lips as she’s talking to her grandma. She looks distressed, so I have to know why. Maybe it’s my protective instinct toward her, but I feel like if I know what’s wrong then I could possibly fix it. I can’t tell what she is saying, though.  She’s talking way too fast, stopping only occasionally to take a bite of her food.
“Are you going to eat your food or just stare at her?”
“There’s something wrong,” I answer. “I can’t figure it out.”
“Mine tastes awesome, so your taste buds must be screwed up.”
“No, Will. I meant that something is wrong with Laura.”
He puts his fork down into his empty plate and wipes his mouth. “You’re worse than I thought.”
I look up at him. “What do you mean by that?”
“Are you kidding?” he asks. “Whatever this is between you and Laura is much worse than I realized. I can tell you’re crazy about her.”
In light of the Boston tragedy, Tasha is donating half of her proceeds during the blog tour to the American Red Cross.
Message from Tasha:
The Red Cross is always the first to respond in a tragedy like this, and they are always begging for blood and monetary donations to keep up with demand. I can’t personally go to Boston to do any good, so this is what I CAN do.  You can also make a donation directly to The Red Cross  www.redcross.org.  Thanks for your help, and join me in praying for those affected! 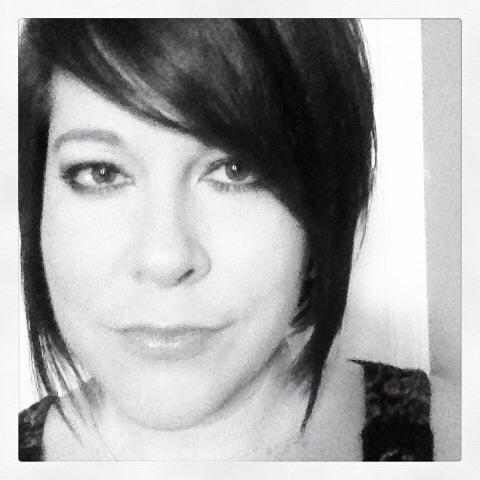 Tasha Ivey is a literature fanatic, whose love for the written word fostered her development into the writer she has become. A lover of an extremely erratic mixture of literature, she has been influenced by authors from Jane Austen and E.M. Forster to Charlaine Harris and Alyson Noel. But her biggest influence and literary hero? Nicholas Sparks. Aside from writing, since she doesn’t have anything other than a shriveled up prune on the left side of her brain, she prefers to spend her time being creative in other ways like painting, cake decorating, and various types of crafts. That is, if the constant voices streaming through her head allow her to stop making up stories for a while. Lucky for her, she has a huge supportive family, including her amazing husband and two kids, who doesn’t complain too much when she hangs out with her characters more than she does with them. She is currently working on her second novel, Every Breath, which is due to release this year, and she also plans to start a sequel to her first novel, Destiny Ever-changing, this summer.
Facebook, Goodreads, Amazon, Barnes & Noble, Twitter, Authorgraph

Also make sure you check out my Tasha Ivey Author Page (CLICK HERE) for more information on Tasha  and her books.