This is your backstage pass to find out why readers, reviewers and bloggers have fallen for a love story that was never supposed to happen! 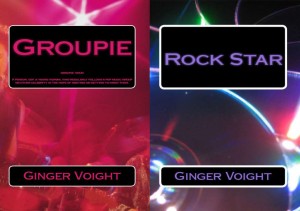 The first two books of the Groupie Rubenesque romance series by author Ginger Voight, is now offered in one economical bundle (CLICK ON ABOVE IMAGE TO PURCHASE THE BUNDLE)!  Join Andy Foster as she navigates the tumultuous relationship with Giovanni Carnevale, the charismatic lead singer of “Dreaming in Blue.” This bad boy rocker keeps Andy under his seductive control for more than three years as their relationship faces off stalkers, groupies, opportunists and all the other trappings of fame.

This sizzling contemporary romance series stars a full-figured beauty and the man that wants her, but may never commit. It’s a rock and roll fantasy come true for any fan who has ever contemplated the possibilities of nabbing the guy you must share with the world. 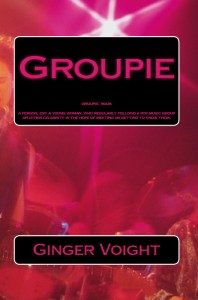 Andy Foster never expected lightning to strike when she met the enigmatic frontman of an up-and-coming rock band, but Giovanni Carnevale left her thunderstruck. At first it is easy to use her freelance writing career as an excuse to indulge the steamy flirtation from city to city. As she gets ever closer to making her lascivious fantasies a reality, however, she finds herself entangled in the fake and sometimes dangerous world of celebrity where nothing is as it seems, including the celebrities themselves.

She hangs on to find something real amidst the illusion, while Giovanni balances what he wants against what he fears most. Over three years they come together and blow apart with the same kind of combustible passion. This keeps them orbiting in the others’ stratosphere despite new relationships and bitter betrayals. They are bound together by something they can’t fight, something that draws the ire of another fan determined to claim Vanni all to herself.

Unknowingly they all race toward a dramatic moment of truth that will leave two people injured, and one dead, with a twist of an ending you may never see coming. 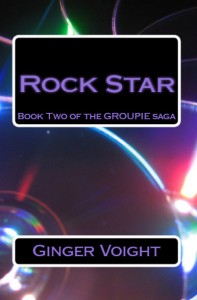 Rock Star” is the highly anticipated sequel to Ginger Voight’s Rock and Roll Rubenesque saga, which began with the sizzling debut of “Groupie.” For those who have been anxious to see what has become of Andy, Vanni and Graham… buckle your seat belts. You’re in for a thrilling new ride right through the dark underbelly of fame.

In the second book in the series, readers get insight into the mind of the romantic hero, Giovanni Carnevale, as he reaches the pinnacle of success as a worldwide rock star. Everyone wants a piece of him, but all he wants is the one thing he can’t have. He’s angry and he’s entitled, with ample opportunity to make really bad decisions. The combination proves explosive.

Andy must watch from the sidelines as her beloved Vanni falls victim to grifters, scandals and alcoholism thanks to this self-destructive behavior. Things come to an emotional head when his estranged father comes on the scene just when Vanni thinks things can’t get any worse.

Darkness shadows Graham Baxter as he begins his journey as a paraplegic. The powerful mogul bitterly handles this new vulnerability by lashing out at the people who could help him the most. He needs Andy more than ever, pulling her in yet another hopeless direction. Andy is put in the impossible situation of keeping the most important promise she has ever made, or saving the man that she can’t help but love.

Author Ginger Voight turns up the scandals, secrets, passion and heartbreak to 11. Flawed characters face excess and all the pitfalls that entails. They fight as hard as they can to hold onto anything real in the fake world of celebrity.

BRANDEE’S REVIEW:  (would love to hear from you – comment below!)

Buckle your seatbelt for a CRAZY roller coaster ride with this series…… I am typically the kind of girl that NEEDS to have her Happily Ever After in my books and my “book boyfriends” need to W-O-W me with their qualities – even those bad boy rock stars have those right?!?  AND I am a sucker for a Rock Star Book!

Let me start by saying there is a disclaimer to this series – which makes this all the more FUN FOR ME!

Disclaimer: This series features a hero you might find you love to hate, a heroine you may want to slap, and frustrating triangles with dubious fidelity. Those who cannot abide “cheaters,” who need their bad boys to be mostly good, or who must have a HEA at the end of each book, may be advised to look elsewhere.

AND YET……..These books I LOVED to HATE and COULD NOT put them down!!!  Which is why I want to share these books with YOU.  Do “WE” ALWAYS NEED to have everything go perfectly in our books??? (ok, don’t answer that)……sooo much angst – so many things made me NUTS – and THEN there were the other parts….. and I just HAD to keep on reading.

Then, I think back to all the times a book made me go CRAZY and not going exactly as I would have planned (ex. Thoughtless, Beautiful Disaster, Reason to Breathe, The Perfect Game, The Edge of Never……I could go on and on, but that is my point —- these were all amazing books) ……….. you know what I am talking about – when you just want to (or did) YELL at the characters, you want to throw your kindle across the room, you want to go curl up and just cry!  Well  isn’t that what makes a series so great? You get to watch, HOPEFULLY those characters grow or change, or I don’t know, maybe  some characters will just take a HIKE……

I am fortunate enough to have been given the opportunity to read an “advanced reader’s copy” of the 3rd Book “Mogul” to the series and IT IS RELEASING February 5, 2013!  I won’t say if we get to that happily ever after or if the characters will redeem themselves and grow, but I will tell you that Ginger Voight did an amazing job at keeping me hooked and had me feeling exactly as she intended the reader to feel.  There were certainly parts where my heart was racing and I was ready to go Facebook her and BEG HER to tell me what was going to happen……….(but I did not).  Check out the bottom of this page for a “true story” text recap of the series from one of my girls on my panel.

I always think it is funny while one of the girls on my panel is reading a book you recommended to them and then the texts and emails start…….ME

True Story #2 – Email Recap – re. Groupie from Lisa, another one of the girls on my panel:

O.M.G. – First, I thought Kiera and Kellan were a couple that couldn’t get it together. Kiera was the most frustrating girl I had ever read….. Then a few months later, I read A.C. and Lexi…. bitch slapped Kiera and took the title. Soon After, the reigning queen went to Olivia in the Opportunist. Today the most irritating character is Andy from Groupie! I just want to hold her down and beat the shit out of her. Make a f@@king choice already! I was up til 4 am and spent an extra hour on the treadmill. It got me to 73% through the second book and by 11 am I needed a fricken drink. Thank god my kids were at school until two. Because nothing was getting done today. I was at my wits end all day and when I finally thought I could have my reprieve with a happy ending and everyone lives happily ever after she throws the cliff hanger!

Wow, what a fantastic recommendation! I had been bored with my last few books I had picked up – All the same cliches over and over again. And, this came along and knocked that slump right out of the water. 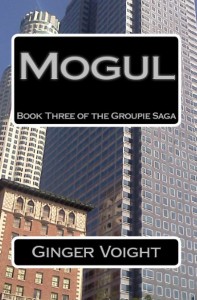